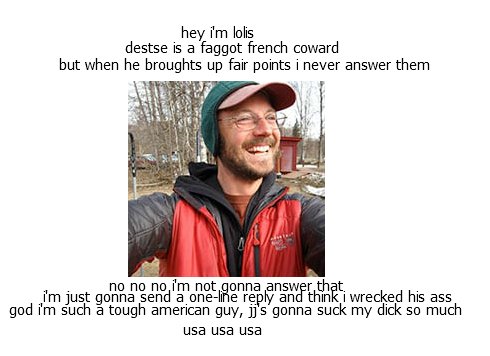 You're the only one trying to make these discussions disappear. If I was the sissy, that'd be my job, don't you think?
September 1, 2019; 18:05 - Reply
lolis: This is too easy. I'll do the absolute minimum to keep you jumping.
September 1, 2019; 18:25 - Reply
Destse: @lolis: Well, I was going to continue, but you're not entertaining me anymore and the fact you're obsessively deleting the discussions we have is the final cherry on top to prove all of my points. Unfortunately, the concerto of farts that your 3 brain cells have produced is forever plastered on the Internet for everyone to have a good laugh at, hence why you got so mad at me.

As a last note, I don't know at which point you came to the conclusion that I was somehow fuming and jumping in rage. I kept my composure throughout this whole discussion -- and no, insults don't count as "losing your composure". "Losing your composure" is when you pussy out, try to erase the proof of the abrasive ass-kicking you have received, and call someone a sissy because they kept a record of the discussion when you were the only one that resorted to extensive means to erase it.

But besides that, my work is done. The tactic you're now employing is a common mental loophole used by dipshits that are unable to conclude an argument in their favor:
=> If the person keeps adressing your empty messages, accuse them of getting mad.
=> If the person stops answering, accuse them of being a pussy.
With that false logic, the person you're aiming at is in a negative position either way. But that's not how I work lolis, nor how anyone who has some logic and mental honesty works.

So where does that leave us? I assume your asshole is a little looser now. That's good, holding it so tight might have led to complications at your age. Maybe you'll celebrate your non-victory with Jj01234. You'll probably keep putting funny memes about the French being surrendering cowards on your "toilet" room, inbetween a couple drawings of jj and of faeces.

•lolis said something to piss him off.
•Detse is in love with jj and don't understand why she would want to spend time with lolis.
•Detse is insane.
September 4, 2019; 12:38 - Reply
lolis: Destse and I had a discussion about patriotism or something a long time ago. Apparently, he hates America and anyone who loves it. So insults were shared. He must have gotten the worst of it because he's obviously still in pain. This was quite a long time ago because I had to be reminded of it! I'm a senile old man, dontcha know?! :)

I don't think he even knows who JJ is and, rumor has it that Destse isn't interested in ANY female....if you know what I mean. Nothing wrong with that, mind you....but just too point out that I don't think his vitriol towards me is based upon something normal, like jealousy.

I think you may be correct about the insanity part, though.

God Bless America
September 4, 2019; 12:46 - Reply
mismocevapi: you're focusing way to much on the details tomte. hes mad because he brought up his name negatively after being inactive.
September 5, 2019; 12:17 - Reply
Destse: @Tomte: I'm not mad at lolis for being an "old senile man that flirts with young girls"; nor am I mad at lolis at all, in truth. I feel like "mad" is too strong of an adjective to describe my feelings towards him. I could be mad at someone if they had just a single ounce of credibility, but that's not the case with lolis.

I guess you can compare lolis to a very young, unsupervised child who has enough free time to be an obnoxious clack-box and randomly insults you on the street thinking that what he's doing is the paragon of comedic achievement. No one in their right mind would be mad at such a child, merely astounded at the lack of discipline that he would display. Some would rather continue their path and ignore a greasy poltroon such as lolis -- something which I had been doing for almost one year and a half after the aforementioned "argument" occurred.

However, there comes a time, after the same moronic tramp has been stuck on the same speech for almost one year and a half, where no matter how patient you are, you'll feel compelled to tell them to shut the fuck up. This line has been crossed, and I don't think it's unwarranted anger on my end, but obsession on lolis' end.

While that white-livered scamp has the witless audacy to keep his profoundly delusional diatribes coming, it's worth noting that what he's claiming about me getting the "worst of it" is a saddening projection of his own mental state upon me. Truth be told, aside from a few separate occasions where I randomly stumbled upon him on certain rooms and grabbed the opportunity to squeeze some fun out of him, I haven't -- not a single time -- came back to him to harass him or anything of the sort. The current discussion arose from his unevidenced claims that I was apparently still trying to piss him off or "tease" him, which I have never done, at least not for the past year.

With that in mind, I think it's only fair to assume that lolis is the one who has a hard time getting over this whole situation. This politically-charged conversation about America and patriotism happened all the way back in early 2018, yet I'm properly astounded to see that he still has the time and the willpower to make caricatures of me, publicly accuse me of continuing to tease him, or taunt the French and their supposed cowardice as some sort of revenge for my criticism towards the country he has never lastingly contributed to the betterment of.

So no, it's not about the Flockmod girls he has curious obsessions over; it's not about his undying love for a poorly-drawn comic series and her batshit insane author; or anything else that he did that could be considered contentious or reprehensible. Way back in 2018, it was about a political fistfight regarding our radically opposing views of America -- which is something I couldn't care less about nowadays. All that it is about, in the current time, is his obsession with those events to the point of accusing me of teasing him on a website I hadn't visited in months prior to this incident, something which I believe I am right to find unbelievably ridiculous. In those circumstances, I feel obliged to ridicule him publicly -- which is exactly why he has obsessively deleted the comment sections in which I posted my messages -- in a faint glimmer of hope that maybe, with time and effort, he will finally understand he comes off as absolutely nothing but a deeply deranged trifler of grievous proportions.
September 5, 2019; 16:12 - Reply
lolis: I pretty much get along with most of the other artists, here. I don't think Destse even draws at all, so I can't figure out why he would want to be here...except for his longing for a real father figure in his life. Unfortunately, he chose me to fill that void. But if I raise any kids, I don't want the extra responsibility of adopting a special needs kid. Maybe the Big Brothers organization can help him.
September 5, 2019; 17:04 - Reply
Destse: @lolis: You're too kind; though I want to put your worries to rest: I can confirm I was lucky enough to have a father that was a responsible man who worked hard to provide for his family and made me the person I am today. Perhaps that your lack of a father figure is the reason you became a socially inapt pothead -- that I'll never know, but unlike you, I'm not interested enough to even form flimsy hypotheses. When you finally answer my points and prove that you're capable of normal argumentative discourse, though, I promise I'll begin treating you as an equal and we can settle this whole situation, since as I explained in my previous message, I think it impacted you much more than it really impacted me. Don't worry, after a couple blunts and a chilled conversation it will only be a bad memory. I can inbox you big words and witty references you can use to seem less like a mentally crippled weed addict. Have you read Clifford the Big Red Dog yet?
September 5, 2019; 20:27 - Reply
lewd: You're both stupid faggots now kiss
September 5, 2019; 22:30 - Reply
jj01234: I saw a lot of comments and fights on the picture I saved and I deleted it. It wasn't anyone's request and it was just that I didn't want to see a fight.
September 5, 2019; 23:03 - Reply
forerunner2: i love how the comment section of flockmod's gallery is still a war zone of utter nonsense
September 6, 2019; 00:22 - Reply
lolis: https://www.youtube.com/watch?v=SmR89bFZLdc
September 6, 2019; 04:38 - Reply
Tomte: I have to agree with lewd, this is stupid. Kiss each other on the mouth, slap each others butts and go doodle yourself a happy picture.
September 6, 2019; 09:02 - Reply
loopv: ew, gay tomte
September 6, 2019; 09:52 - Reply
Destse: @jj01234: Yes, I'm aware women have a hard time handling conflict no matter how trivial. So I guess that excuse works for the first picture; but not for the second one, that lolis had saved and that he could've been the only one to delete. There are two possible reasons for that deletion:
=> Lolis felt humiliated.
=> Lolis cannot handle conflict, exactly like a woman, ironic for someone whose only argument was calling someone freshly out of the military a sissy and whose only claim against me was that I apparently behaved emotionally akin to a woman.

@Tomte: Lolis is the one making this whole situation more stupid than it should be, not me and I already explained why in my previous comment. If he actually answered my points and didn't shove his whole fist so far up his ass, I guess it could look like a basic settlement between two functional human beings, but clearly this is all very one-sided and it doesn't take a PhD to understand who's bringing the whole conversation down to something profoundly saddening.

That withstanding, though, it still amuses me to see lolis' answers get drier and more ridiculous with each day that passes, so I think I'll keep this going until he has exhausted the remainder of his already extremely scarce vocabulary and argumentative talent and is unable to come up with any other hilarious 2010 memes. It's lame that it has to go to this level, since I intended to talk some sense into this thick-headed loitersack, but at this point it's fair to assume he's never going to make an answer that's actually logical or responsible as would be expected of a man in his fifties; no matter how much hostility (largely unwarranted hostility, though, since I had gotten over this situation well over a year ago -- he's the one who felt the need to keep incriminating me for people being mean to him on the Internet) there is between me and him.

Making these posts takes up 15 to 20 minutes of my time, it lets me put my argumentative skills to the test, keeps the gallery entertained, and it makes lolis lose his mind a little more everyday. He's the only one who has to lose anything significant from any of this; but I'd be too optimistic, taking into consideration his extensive resume, to think that he would realise that anytime soon.